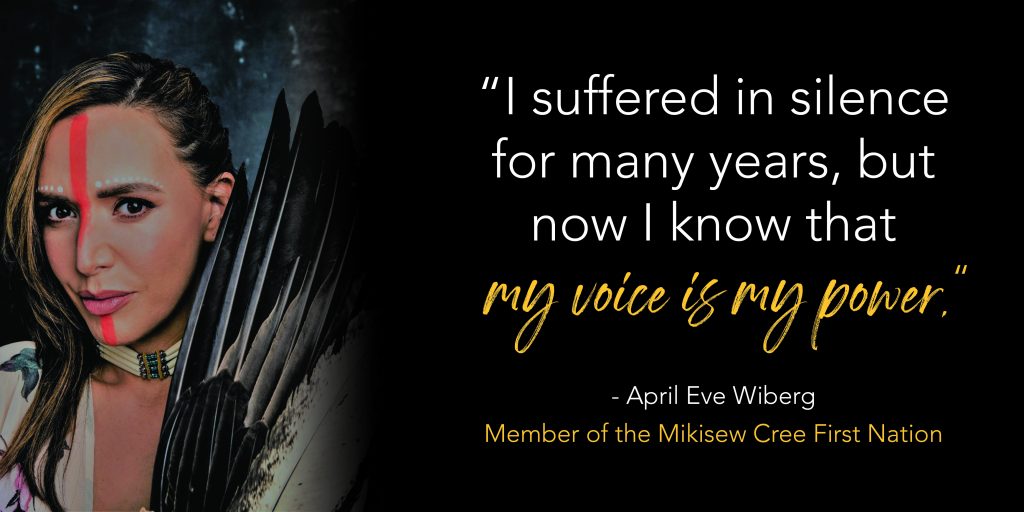 My story is one of struggle, exploitation, determination and the pursuit of Truth. I use my story to support other survivors of sexual exploitation. I suffered in silence for many years, but now I know that my voice is my power.

I grew up in a difficult household – there was substance abuse and violence, and I was the victim of racial slurs and bullying in school. I grew up without my birth mother.

My own substance disorder started when I was still in diapers. I remember being so thirsty, I went from discarded beer bottle to beer bottle while my Dad and stepmom slept. I remember spitting out a cigarette butt, after choosing the wrong bottle.

I started using alcohol and drugs as a youth to try to calm down my anxiety. At 16, I took a one-way trip from rural Saskatchewan to live with my birth mother for the first time in Edmonton, hoping for a better life. Sadly, as a residential school survivor, my mother didn’t have the tools to be able to parent me.  I later became homeless and dropped out of high school.

I met an older man who introduced me to cocaine and the nightclub-life where I met new people who made me feel like I belonged. Through him I met an older woman, an ex-bikini model, and she would dress me up and tell me I was beautiful and encouraged me to enter bikini contests in nightclubs around the city for her; I was only 16 years old and she fully knew this.

As I got older, I struggled to get by and felt desperate. At a nightclub I met a young woman that everyone seemingly looked up to – she told me she could take me to a place where I could make money, by giving massages. The men asked for more than massages. I was terrified. I got moved around, eventually ending up in New York City, and was trafficked in various locations for almost 10 years. Although I am Indigenous, throughout my exploitation I was always “advertised” as an exotic. Because of my so called “exotic” look, I could pass for Latin, Asian and other races – clients wanted to buy into a fantasy that doesn’t really exist.

By the grace of the Creator, I was able to escape my traffickers and find my liberation. I know I am lucky to have survived; there were so many situations where I could have been murdered or gone missing. Today, I have transformed those experiences of trauma to prepare me to be the advocate I am. You have to have a certain level of fearlessness to walk into a hotel room with a complete stranger, and today I channel that fearlessness towards this urgent crisis.

Using your voice and sharing what is so deeply personal is frightening, but I’m tired of hiding. What happened to me wasn’t my fault, nor was it the fault of my family. What happened to me is a larger issue in our society. We must break down the myths and educate ourselves and communities about what sexual exploitation and trafficking really is about.

It is paramount that we dismantle the stigma and shame experienced by survivors by supporting others like me, providing opportunities share stories if they so choose to in culturally safe, non-judgmental and caring spaces. I know there are other April Eves out there, and I will do everything in my power to protect those who need it most.